By Jane August 16, 2017
Getting You Started with WinAppDriver

Are you a total beginner to programming just like I am, but you would still like to try out Microsoft’s tool for application testing? Well don’t worry, I got you covered. Below I will detail my experience with getting started with WinAppDriver and testing basic Windows application such as the calculator in Python and C#. This tool could be beneficial for developers that would like to test their software before production or launch. The purpose of this tutorial is to create easy steps to follow and enable you to use WinAppDriver. I once read a quote that says:

So here goes nothing 😊

What is the Windows Application Driver?

Windows Application Driver is a user interface (UI) automation test service that uses Appium’s Webdriver Protocol. WinAppDriver makes it easy for automation test engineers or anyone to test their Windows application by enabling testing on your local PC machine as well as remote locations. It allows developers to detect and fix bugs in their products. Microsoft released the first version of WinAppDriver on March 30, 2016. WinAppDriver is in the Beta phase. Since its introduction, they have launched eight additional releases.

1. OS System: Windows 10
2. Visual Studio Community 2017 and Visual Studio Code (Free.99) (You should download both, as you will need both the community and code version to run the examples in this tutorial)
3.      Pip ( Python package management system)
P.S. execute the code in command prompt (cmd) for the installation)

OK, Let’s Get Started for Real (I pinky promise!):

This where it gets exciting! Getting WinAppdriver to run on your machine is as great as the feeling someone would get after they climbed Mount Everest I suppose. (Just kidding)

First things first, navigate to the WinAppDriver Github, scroll to the bottom of the page and look at the README.md. This file has a ton of additional information about the driver, demos as well as information on how to create your test script in C#. In that same file, you will find instructions on how to download the executable (.exe) WinAppDriver. Follow the instructions listed. 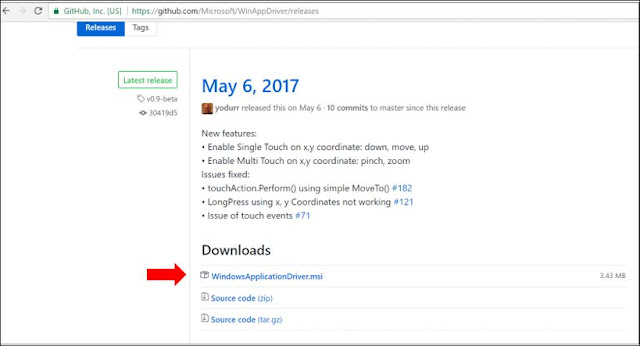 I already had the driver installed on my computer, but I just wanted to show you what the installer interfaced resembled.

Note: You should install WinAppDriver on the machine where you will run your test. Also, the application you are testing should be installed on the machine as well.

Once you have done that, come back to me. Personally, I would suggest downloading the WinAppDriver Github repository. It makes it easier when you are trying to run the sample test to have everything in one place. In this example, I downloaded the repository on my C drive. On the GitHub page, click on the Green button that says, “Clone or Download”

Here is how I did it:

1. Copy the full URL in the " Clone with HTTPS " dialog box. 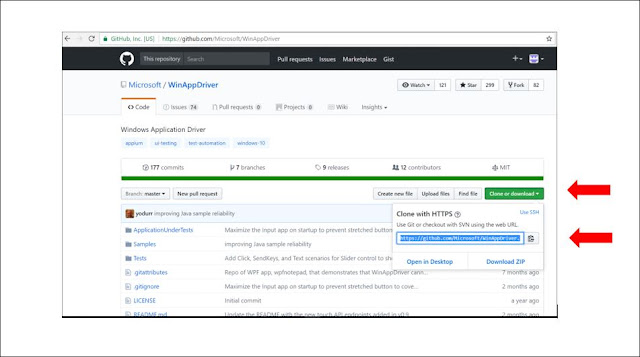 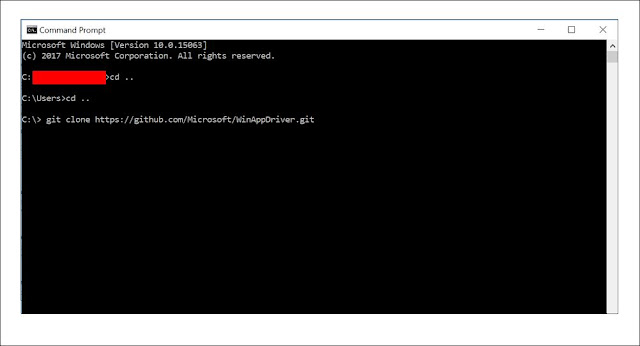 Once you have done that, let the show begin.

In the following steps, I will teach you how to run the WinAppDriver on your machine.

1. In your command prompt, Run the following command to move to the directory where the executable file is located.
cd \Program Files (x86)\Windows Application Driver

NOTE:  Unless you changed the directory of the Windows Application Driver, this should be the same on your Windows 10 machine.

2. As a beginner, I always check my directory, to verify the name of the executable and to see what’s in the folder I am navigating to.
C:\Program Files (x86)\Windows Application Driver>dir 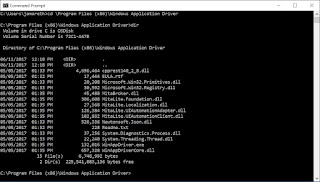 3.      After you have searched the directory, run the following commands to execute the WinAppdriver.exe
C:\Program Files (x86)\Windows Application Driver>winappdriver.exe

NOTE: At first, I got an error saying I could not run the winappdriver.exe because it could be only be executed in developer’s mode. I would recommend enabling your device for developer’s mode before moving any further with this tutorial.

Don’t Panic! In my case, another driver was already listening on port 4723. Navigate to your web browser and type Localhost:4723/Sessions, this should return a JSON that tells you what application is listening or using the port.

If an application is listening, you will get a message that looks like this:

I would suggest exiting out of the application or in my case uninstalling the app if it’s not needed.

Once you have done that, reload the WinAppDriver.exe by running the command in the cmd. You should get a message that says, “Windows Application Driver Beta listening for request at HTTP://127.0.0.1.4723/.”

NOTE: Do NOT press ENTER or else you will exit out of the WinAppDriver.

If you want to verify that you have fixed the issue, navigate to your web browser and go to Localhost:4723/Sessions. This time around, it should return a message that looks like this:

If you've just managed to get through the first phase, pat yourself on the back because you deserve it. Phase 1 enabled us to run the WinAppDriver correctly. In phase 2, we will be running the calculator sample test to see whether the driver can identify the elements for our calculator and returns a pass or fail for the test. 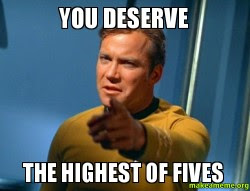 Once the directory is listed, I go to the location of the sample test I would like to run. For this example, I will be running a calculator test on C# and Python.

The command above should open Visual Studio Community 2017, Once that opens, you will see three panels. In Solution Explorer (Right Panel), open the BasicScenerio.cs then go to Test Explorer (Left Panel) and run the test by click on Run All.

After the test runs, look at the command prompt window where the WinAppDriver is loaded. You will get a "report" during your test, and WinApp driver will create a session that logs the activities of the test. During this, you will be able to see whether or not a test passed or failed the criteria you had listed in your code. Your session will look like the image below if you passed all of the tests: 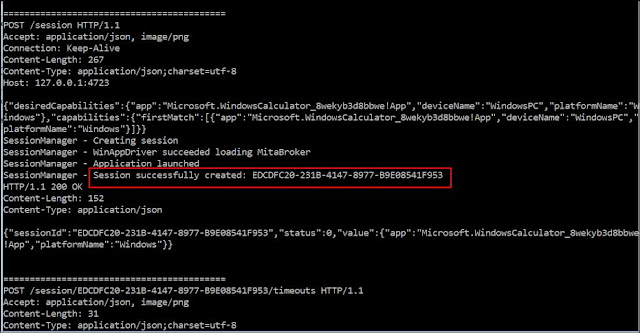 and if any failures occur, you will get something that looks like this

This feature enables automation engineers to debug their code.  n my case, the failure happened because I stopped the test when I moved my mouse, exited out of the calculator app and Visual studio while it was trying to find an element. I would suggest that while the test runs, to not move your mouse so that the driver can find the elements. You can also look in visual studio in the test explorer panel to see if your test is green (passed) or red (failed)

In your command prompt,

The command will open your python test in whatever code editor you chose, my editor of choice is Visual Studio Code.

Once the code is opened in VS, I press F5 to run the code, which then executes the test. Just like in the C# example, do not touch your mouse if you are running this locally because the test can break. Once the test is complete, it will log any failures in your problems at the bottom of the window. 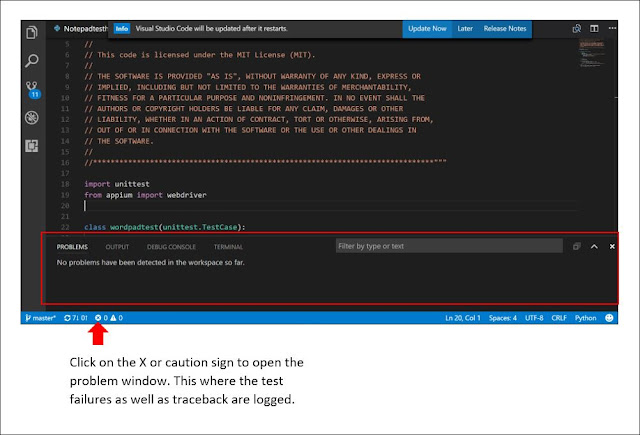 Congratulations! You made it to the summit, you have conquered Mt. Everest. 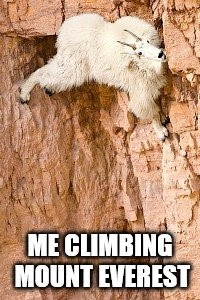 In my humble opinion, the experience wasn't as painful as I thought it was going to be. If anything, it was a great learning opportunity for me. As a complete beginner, I must say it took me a bit of effort to figure out how to make WinAppDriver work properly. I would not say it was intuitive, but part of that stems from the fact that I am not a programmer and that's okay. A gotcha moment occurred after I downloaded the Windows Application Driver, I tried to run the WinAppDriver.exe by just clicking and opening the executable, but it kept closing. I am not going to lie after an hour of trying to troubleshoot; I  had begun to wonder if I had a virus or if my computer stopped working. It turns out that WinAppDriver is so fast that it will open a window and provide you with an error message but closes quickly and before you can read the error message the window is gone. Once I figure out how to properly run WinAppDriver, running the sample test was the easiest part to me.  After running the sample test, some questions plagued me. How come I must load the WinAppDriver.exe in command prompt whenever I run a test? Is there a way for me to program it into my code so that whenever I run any test, it automatically opens WinAppDriver for me? Apart from a few hiccups, the experience itself was great. It inspired me to try and build my sample test using Python.  Next, I will create a WordPad.exe sample test. I hope you enjoyed reading this blog. If not, that's okay as well; I will survive (Gloria Gaynor's voice). LOL.

If you are interested in learning more about the WinAppDriver Project, check out the links below:

Feel free to add comments and any additional tips you have on UI automation testing.

Popular posts from this blog

By Jane September 06, 2017
How to debug your first UI Automation Test Sample Another One! ( DJ Khaled ’s Voice). That’s RIIGGHHT; I am back! I wanted to do my first #HackMonday to follow up on my WinAppDriver (WAD) post. This a three-part blog. In part I of the blog, I will debug the Python calculator sample test. In part II of the blog, I will debug my own Python WordPad test . Background info: #HackMonday is an idea I came up with as a social experiment. The goal is to #hack with someone new, with the hopes of learning or teaching them something new. For this #HackMonday, I had the pleasure of virtually meeting Hammid Funsho (HI FWEND!) About Hammid: A little bit about Hammid, He is a software engineer. He has about 12 years of experience under his belt. He has a passion for automation testing. He codes Java, but occasionally dabbles in Python, and Ruby.  Hammid is currently based out Raleigh North Carolina. How did I come about meeting Hammid? Great question! It’s sim
101 comments
Read more

By Jane July 12, 2018
I KNOW! I KNOW! I am terrible; I went back on my word. I have not been pushing out blogs like I promised I would. But I am back for another one so forgive me? Cool A lot has happened since I last wrote. I have been working on this blog since January but decided not to post it. This is a reasonably vulnerable post, so I was hesitant. I still am, and I am hoping this is the right move. Hopefully, someone will find this and be able to sympathize with this. I wanted to write a blog about my struggle and reflect on the past two years of my life. Back in December 2015, I accepted an offer to come work for Microsoft as a support engineer(SE). My start date was initially set for Feb 2016, but due to family issues, they pushed it back to July 2016. I chose Microsoft partly because my recruiter showed me the most compassion during that time and so easily accommodated my ask to push back my start date. In July 2016, I started my job as an SE. At first, I loved my job, but slowly and surely i
23 comments
Read more

Jane
Hi, I am Jane, and I am an engineer. I work for Microsoft. Welcome to Bust A Code! I am building this platform to help people learn how to code. I want to be able to help anyone learn how to code. So I invite you to learn with me. This platform is geared toward beginners, but all are welcomed. I just have one request BE KIND.